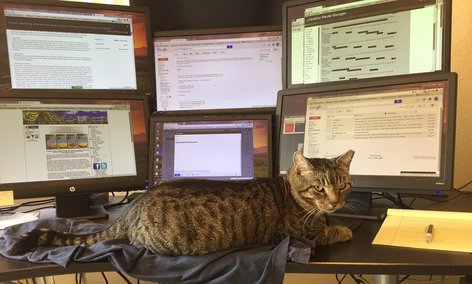 The resources below are good for Programming you and your psyche to some truthful aspects of our world as well as stretching you in ways that might be both a little kooky but maybe a little healthy too.

Some believe human consciousness can be measured by the breadth of that which one can hear and converse about without suffering an allergic reaction; not that which one "knows" or "must believe in" to feel good or secure.   Please see our 'de-programming' page if you need help kicking out some of the garbage that was imprinted during prior times.

The shear volume of information that can be gained from Social Media, Documentaries, Podcasts, Youtube, Websites and those accessing their true Power is simply astounding.   By my estimates we might be able to unravel a few millennia of history in a matter of a few years and oh what a damn wild ride that'll be...

Our Current Recommendations for Mono-gramming (self programming) are below.

Twitter -- Hieroglyphs meet the digital age.  What an amazing tool for communication.  The amount of information I can get from 140 characters (280 characters now), an image or two, or a quick video clip is down right startling.  Obviously your feed is only as good as those you select to follow.  It also makes for an interesting platform to reach out to those personally that you are otherwise separated from due to a lack of personal familiarity.   View it as a way to connect with others in a very targeted and personal  manner more so than a promotional platform and there is much to gain.

Facebook -- It's a tool.  Use it for what its good for and you can benefit greatly.  The diversity of information on Facebook and the level of cross checking that can exist if you have friends that aren't uniformed can be exceptional.  The FB Groups provide collaboration that no other non-psychic platform offers at this time.  There really is no better place for diverse worldly Programming if you have a diverse network of friends and a great sense of discernment (which is what most are lacking).   If you have selected your friends solely based on those with similar views to validate your world, a potentially good programming resource will work against you.

Our truly creative documentary film makers are now stepping out with the information we need most at just the right time.  The really BIG lights are coming on now.

Inside Bills Brain - 2019 - In a very weak moment, BEFORE his Commercially Crooked, Community Compass-less, COVID-19 Kingship appeared to battle the Corona Virus, I decided to take this in. This documentary details work on toilets and closed loop sanitation systems that is stellar.  His vaccine shit makes my skin crawl. In the third episode he and counterparts unmask a system that can eliminate spent nuclear fuel rods from our world forever, with the byproduct being energy.  If that technology is legit, it's a no brainer. You can imagine, after he conquered everyone with vaccines he'd want his own power systems for free for more monopoly.  Let's just take his ideas, sans vaccines, and toss him from the plank as we zoom on along?

Meet the REAL Bill Gates**
Between the algae based free energy system in the Need to Grow video below, the toilets and sanitation systems developed as a result of Gates foundation funding, the energy systems that can create power while eliminating spent nuclear fuel rods, and the skyrocketing interest in hydroponics and natural farming, there's not much left to do but DUMP GATES now that he's done all the hard work and START CHANGING BELIEFS.

The Poison Squad - 2020 - The story of Dr. Harvey Wiley, the condition of unregulated food in the late 1800s and the origins of the FDA prior to it's co-opting after formation.  A man's 30 year battle that was won via the publishing of a single book by Upton Sinclair called "The Jungle".  An interesting story the reveals the power of novels. (Jan 28, 2020)
The Need to Grow - 2019 - About soil, plants, gmos and glyphosate. There is also however a fabulous section on a working free energy system that involves a boiler and algea. It was developed by one of the great minds of our time, that most have no clue exists.
The End Game with Jeffrey Smith - 2019 - Jeffrey Smith provides clear details about Monsanto's GMO history. It's a must watch. Only 11 minutes long.
​Secret Ingredients - 2018 - Chronic Disease, Glyphosate, Monsanto, and your diet. -- Allow a few families to share their sickness and wellness story with you, and you will never view your food and the state of our polluted food supply the same again.  We need changes fast.
The Devil We Know - 2018 - 3m created c8 and Dupont used it for Teflon. In the early 1980s they realized in raw form it was a carcinogen and caused birth defects. What did they do? They purchased land for non-hazardous dumping with access to a river, and they started pumping the waste straight into the river and did that for decades. How did they cover it up? They took over the EPA in 2000. Why has it taken this long to get addressed? Because the US legal system as it's currently configured is now obsolete.
Cancer the Forbidden Cures - 20xx -- Mossimo Mazzucco is an Italian documentary film maker like no other. This is just one of his brilliant works, and the first part details the history of Western medicine in an easy to follow manner that is mind blowing. After that,  you will realize the level to which cancer cures have been buried by the for profit medical industry.  If the link doesn't work, search youtube for another posting.  [ check out Mossimo's other documentaries too! He has others equally as impressive! ]
Sacking the Sacklers - 2017 - This is in fact a single webpage, but it has all the content of a documentary.  This exposes commercialization of opioids and the Sackler family's manipulative business and marketing techniques in simple terms.
HealDocumentary - 2017 - Restoring Health and Wellness -- HEAL takes its viewers on a scientific and spiritual journey that reveals the incredible intelligence of the human body and how our thoughts, beliefs, emotions and perceptions strongly affect our health.  A course on the-healer-within  featuring many recognized names and three personal journeys
GeoEngineering R Us -  2017 -- Geoengineering and Chemtrails.  Rosalind Peterson, ex USDA Farm Service Agency Crop Loss Adjuster w/ family farming details Geoengineering and Chemtrail realities and problems like never before.
An Open Secret - 2015 -- Pedophilia in Hollywood --In 2015 a documentary was released that shined a tremendous light on Pedophilia in Hollywood.  People are named, and some are still in the business, and some of those are working in child programming.   Getting the video out and keeping it online was tough.  In 2017, the creator/director re-posted it for free during the Harvey Weinstein explosion.  This link goes to Vimeo. Seems he can't keep it up on Youtube.
Rabbi Yaakov Shapiro and Gilad Atzmon - 2015. Two prominent thinkers, the ultra-orthodox Rabbi Yaakov Shapiro, and philosopher, jazz artist and ex-Jew Gilad Atzmon, met to discuss hard questions about Judaism, Jewish politics and the meaning of Jewishness.
Time to Choose - 2015 - Your world and climate change -- The speed at which solar is climbing is startling, and its a great thing because the speed at which some lunatics are destroying nature and the speed with which  other issues are deteriorating is comparable.
Forks Over Knives - 2011 - Degenerative Diseases and your diet - What you don't know about your diet is killing you -- cancer cells turn on and off based on the ratio of animal to vegetable proteins consumed --  as told by two Doctor's with family farming background.
The True History of Marijuana - 2010 - Massimo Mazzucco uncovers a truth buried deep in the 1930's that has set back society by 80 years in one way, and 1000's in another.  Without this plant, the world lives in the dark ages, no matter the technology that exists.  For a full list of his movies, and bio see https://en.wikipedia.org/wiki/Massimo_Mazzucco

Podcasting -- what an amazing platform for sharing and communication.  Pre recorded shows can be downloaded onto personal devices and listened to without internet connectivity.  Advertising is only as significant as the publisher of the info makes it and it is far less than any other radio or TV platform we've seen thus far.
The Higherside Chats -- Greg Carlwood -- Purely historical to conspiratorially rich to imaginatively stimulating. Great coverage of past and current events with an interview style and education about his guests that is second to none.
Joe Rogen Experience -- Joe Rogan -- Original description { From time to time he has some good guests and some good conversation. Some can tend to drag on and full spectrum of conversations are limited } Then he got bonked by COVID and CNN and sh-t got good when he woke up!! Highly recommend now!
Truth Warrior - David Whitehead (creator of Cult of the Medics video series)
Rune Soup -- Gordon White -- Gordon has a unique style and enjoys talking about magic and magical practices.   Currently living in Australia
Congressional Dish -- Jen Briney -- Everything you want to know about the realities of stuff passing thru Congress
History on Fire -- Daniele Bolelli

Interesting, Knowledgeable and Motivating People (All Authors too!)

I first heard most of these folks on podcasts.  Wow. What a group...

this is new.. just listing names for now..
Jordan Peterson - student loan - ​
Larry Klayman - FreedomWatchUSA - former Federal Prosecutor
The following claim to be Progressive or Investigative, but prior MSM experience and some behavior is sketchy.  Decent source of info sometimes, but view with all filters working.  Remember that in many cases it's not what they are saying and covering, but what they are totally leaving out of the dialogue that is problematic.

Out of the Shadows - https://www.youtube.com/watch?v=JVo-Y8Yj8os